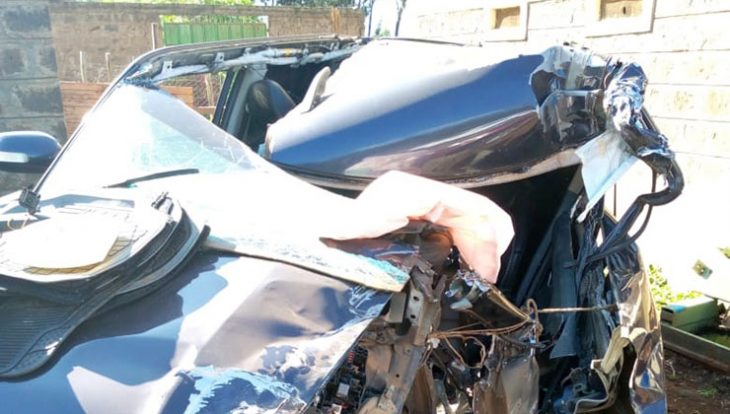 Wreckage of the vehicle the three school heads were travelling in when they rammed into a stalled lorry.[Photo, K24TV]

A high school principal  has died while on his way to collect exam papers in Naivasha town.

The principal of Rev Jeremiah Gitau secondary school passed away after the vehicle she was travelling in hit a lorry in Longonot along Mai Mahiu – Naivasha highway.

In case you missed it: Magoha: No prayer day, pray for your child in the house

The others who are principals of Mustard Seed Secondary and Kiambogo Secondary sustained serious injuries and were rushed to Kijabe Mission hospital.

Confirming the incident, Naivasha Police commander Samuel Waweru said the vehicle which had the three on board  rammed into a stationery lorry.

”The school head died on the spot while the other three sustained serious injuries,” he said.

According to Naivasha Deputy Commissioner Mbogo Mathioya,  exam materials have already been dispatched to the affected schools. He also said that the deputy principal will take charge of the public school  and the Ministry of Education officials will take control of the two private schools.

The Kenya Certificate of Secondary Education kicked off today with Professor George Magoha saying no cases of cheating will be tolerated.

Read also: Discussions To Have With Your Teen Before College

Most dark-skinned ladies shy away from trying different lipstick shades. Choosing a lipstick that works is challenging so they opt to stick to at most two color shades. We compiled

A Pastor in Uganda has enlisted the help of local elders to help him eject his daughter’s husbands from her home, an undertaking that is proving rather futile.